Got the seven back and it was leaking fuel out the manifold. Combined with the surging at idle, I’d expect the likely cause to be failed O-rings, so I ordered a set from http://www.fastroadcars.co.uk/ as well as some thackarey washers. As I will need to remove the carb I ended up buying a carb synchrometer too. My hope is that speed-on got the idle jets close enough that sorting out any air leaks wont cause it to run badly now.

I did go for a quick blat though, and found the car to run pretty much spot on, the progression is pretty nice, occasionally a little hesitant but I think that will be cured once the air leak is sealed. I was spinning the wheels in first second and third when it came on cam, so had to take it very very easy. The fan and oil cooler seem to be working great as its now sitting exactly on 80C when on the move rising to about 90’ish before the fan kicks in and brings it down.

Contemplating going to work and back in it tomorrow.

Went to the Nurburgring yesterday, got up at 8 am, jumped into the car got about 1/2 a mile and realized the engine was up to temperature already, this is surprising because it was -5 outside and it normally takes quite a long time. Delighted at the prospect of getting some warm air into the cabin, I turned on the heater and was belted with ice cold air. Something strange was going on, at first I foolishly thought it was the heater that had a problem. When the steam started escaping I quickly realized the problem. Apparently my antifreeze had frozen, and the system was blocked, watching the temperature gauge go from normal to really really hot to almost freezing again confirmed my suspicion.
Ten minutes by the side of the A12 and everything looked under control, and I topped up the fluid and went on my way, eye glued to the water temperature for the rest of the journey. I arrived at the entrance to the nordschleife around 11 bought some tickets, and had a pee before setting off. 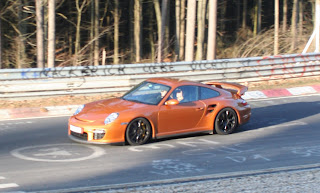 The track was cold, and there was frost in quite a few places outside the racing line. The good news though was that the track was almost empty meaning I had it pretty much to myself. This gave me time to work more on my line and concentrate on getting the gear changes correct, lining up for the bend and turning in at the right point.

The first few laps I was predominantly in 3rd gear dropping to second up the hill after the Breidscheid entrance, then as I got a little better and a little more confident predominantly 4th dropping into 3rd for the uphill, and towards the end I was hitting 5th and the speed restricter in the faster sections.

I found myself turning in way too early for adenauer forst, and nearly failed to turn left a couple of times, I still don’t really know the track at all in relative terms. I also struggled a bit with the right hander somewhere else, I’ve no idea what the bend name is.

I was amazed how much of my undercarriage the karussell removed from my car, there was an obscene amount of scraping and grinding before being spat out at the end, but one of my favorite bends of the circuit, I was entering round about 45, and exiting around 50, I got the impression the car could go a bit faster if I kept the speed up on entry. The MX5 doesn’t have the power to really increase speed that quickly. 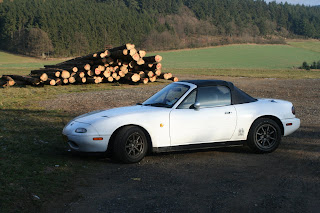 Overall a great trip, the ice was a bit sketchy, but worth it to have the track to myself. The EBC greenstuff pads seem to do a pretty good job, but there is less feedback from the pedal than I would like, and not a lot of bite, so perhaps its time to change them.

Pressed the studs into the alloy front hubs, stripped out the bearings and studs from the rear assemblies, and started to clean them up. I’ll need to get the rear hubs turned down to fit into the disks, which fit over the top.

Now the garage is taking shape I’ll start to get the rest of the donor parts stripped and repaired. I decided on this build to completely refurb everything. Collapsing bearings and worn seals have been the bane of my life since getting the seven on the road.

Once the rear hubs are turned down, I’ll paint them, press in the studs and new bearings, then assemble the calipers ready to mount.

The next thing to do is the diff, I have new seals and bearings to fit, but im not sure if i will paint it or not.

Got the seven back yesterday, Mischa looked a bit surprised when I said it was going in the back of the van, but my patented trick worked. Spent some time today in the garage, first job was to fix some minor things I wasn’t happy with. The clutch pedal was sticking way too far backwards meaning it felt too far forward and had way too much movement, so i adjusted the lash so that it sits in line with the break pedal.

I’m not sure what Tim did with the throttle, but it was way too stiff, so i moved the adjuster to increase the leverage, and removed one of the springs.

The alternator wasn’t working any more for some reason, i think when I cleaned and painted it I disturbed something, so i took it out, cleaned all the contacts, and wiggled everything and now its fine.

I let the car warm up for a while to check that it wasn’t going to overheat, the fan kicked in, cooled it down and worked well, partly i expect down to the low temperature. There was a lot of popping and spitbacks, the manifold was leaking a little on the exhaust, so I tightened up the bolts and it made a bit of a difference, then I noticed that some fuel was dripping down from the O-rings between manifold and carbs, tightened them up and it made a bit of a difference, but not much. I also noticed that the air filters were quite soaking in fuel, not a good sign.

Went out for a quick drive, I’d forgotten just how addictive the car is, the rebuilt engine is a *lot* better, much more responsive. The idle is surging a little and needs some love, but its pretty sorted for the most part. I’ll need to adjust the bias on the brakes again with the new calipers its way too much to the front.

Brought the car back and noticed some oil dripping, it looks like there is stuff coming out of the breather and dipstick so i’ve tightened up the connections and we’ll see what happens.

Neither car ready yet, fury is at least progressing, seven still not imported which is a bit pants. Ordered wheels from George Polley Motorsport, went for 6×13 CXR’s in black on the front, and 7×13 on the rear.

I decided on keeping et18 offset on the front, and based on the notes from Rob Collingridge, did my best to get the right offset on the rear. Rob used 13×6’s on the rear, but had to use a 10mm spacer, by my working, that would be et8. Now, if I use 7″ wide wheels, to keep the same inner clearance, I need to increase the amount the wheel sticks out by half an inch (12mm) so that would be an offset of ET-4. ET0 therefore seems like the sensible option.

I also ordered a large selection of nuts and bolts from namrick. I will also try to get a price for the nitrons today too.