I’ve had nothing but bother with the fuel tank since I had it made to my design by a company in the UK. First they forgot the order, then when it finally arrived it leaked fuel all over the place, and to top it all they over charged my credit card by 100 pounds. I still haven’t had a refund for the difference let alone the leak stopped. This all came to a head last week when I went out for a quick drive and could smell petrol. I turned around and went home, when I arrived I could see a steady stream of fuel dripping out the rear of the car, the weld had failed in the swirl pot. 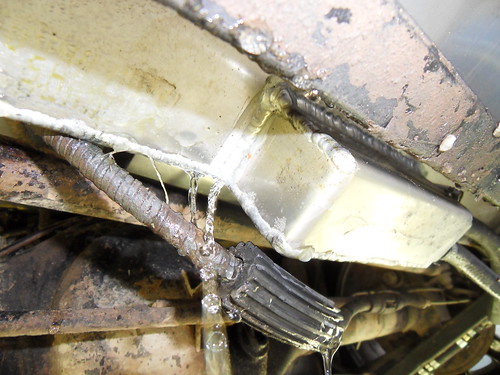 I decided it was time to get the fuel tank out and fix it properly, before doing so I drained the tank and filled it with water, I could see it driping out of a seam at quite a rate. I took the tank out at this point (which requires dismantling most of the rear of the car.) and decided to pressurize the tank a little so i could find all the other little leaks too. At 5psi the tank burst along the top seam. The welds are terrible, and not very deep, which left a 9″ gash along the top.

I didn’t want to waste any more summer driving time, so I decided to fix it myself. I borrowed hans’ TIG welder and set about learning to weld with it, its not easy, and for some reason I seemed to get electric shocks off the welder very regularly, but I did manage to get to the point where I could run a consistently deep, if not very tidy weld, so moved onto the tank. I welded in a bit of right angled aluminum along the top as the gap was too big for me to weld up again, and welded up the seam at the bottom of the tank all the way along. It stopped leaking streams but it still leaked a drop here and there at 10psi.

I’ve now sealed the tank with some Tapox tank sealer, so hopefully this should do the trick, over the winter I’ll probably get a new one made up as I don’t trust this tank any more.