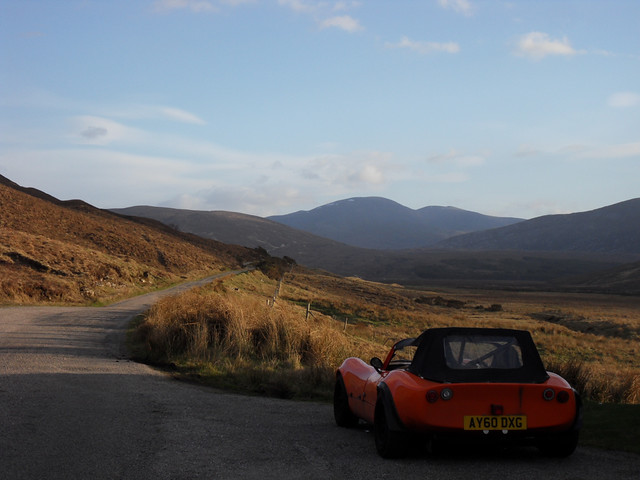 After a very enjoyable week hiking and driving around northern scotland without a hitch, disaster finally struck on my way home.  Not long after leaving the house the car just cut out with no warning, the first time I managed to grind to a halt and stop in a lay by.

It was likely something electrical, so I opened the front of the car and started wiggling.  Eventually after pulling at random wires for a while it started up, and I drove off only for it to cut out again about 10 minutes later.  This time I came to rest just after a blind bend, I felt the only thing to do was get the car off the road, so I used the starter to pull the car forward 15, this ultimately was what ruined my day out.

After more wiggling, and as the battery started to go flat, I called out green flag who sent out a local recovery company.  We hooked up a spare battery and started wiggling again, eventually the engine started, and we continued wiggling until it cut out again, this time I noticed that the battery lead to the solenoid was loose, this is also where the main electrical feed for the ECU branches off, so it was tightened up and off I went.

I stopped for fuel 200 miles later, and as i started the engine up, i noticed that the starter was turning very slow, and initially put this down to the battery being flat and the generator being weak, and drove off.  About 20 miles later it cut out again, this time I noticed the battery lead was loose, I reconnected it but the car wouldn’t turn over.  I called out the green flag again.

As it turns out the issue was not a flat battery, in fact far from it, I’d managed to kill the starter motor which when I removed it was just a pile of black soot and burned electrical connections, this was the price I paid for using the starter motor to get the car off the road, although I’d rather a broken starter than a smashed car.

I wasn’t convinced i’d solved the electrical problem for good though, loose battery seemed too good to be true, and one would  expect that if its loose it would stop running completely, or make no difference, as the generator isn’t affected.  Green flag only restart your car once, after that its recovery or your on your own, so rather than get suck and have to call out the ANWB, I decided to have the car recover to Andy Bates for a new starter, and to get the engine mount beefed up as it had cracked.

I found the electrical issue, or should I say issues once I got the car home a few weeks later, there was some corrosion on the fuses, when the bulkhead flexed the car cut out as a result.  I was finally able to reproduce this when examining something with the lid open, replacing the fuses has solved that issue, and its easy to check.  I expect the loose connections didn’t help things either so I glued and lock wired them accordingly.