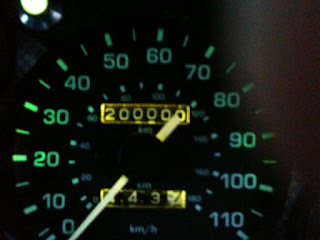 I bought the car with a missing big-end bearing, so replaced the engine at 90,000km. I replaced the engine, and had a couple of issues shortly afterwards with the water pump leaking which would have been easily replaced had it not failed at the side of the M1, Mike helped me out and a new cam belt, tensioner and pump where fitted in a couple of hours.

In 2007 Jerome managed to press hard enough on the passenger footwell that the footrest nipped the permanent live to the alarm causing a short and some smoke. In 2008 at 160,000 the differential pinion gear broke a tooth. Presumably due to the fitment of an aftermarket torsen LSD. In 2009 I had a moment after having found the OEM cigar lighter when cleaning the car out, I’d refitted it and a few days later whilst waiting on the boat at Dover the inside was filled with smoke as I must have knocked it on, and of course it didn’t turn itself off again. In 2010, at 199,460km, the fan belt snapped on the way back from Germany, of course I had a spare sitting in the garage in preparation for the next major service. Other than that I’ve had no other issues with the car which I think is pretty good considering it is 18 years old. It starts first time, every time.

There are a few minor annoyances with the car, the bushes are getting a bit soft, and the original bilstein front shocks are showing signs of wear. The clutch release bearing is also a bit noisy and will be replaced soon along with the clutch and spigot bearing. The car eats about 1liter of oil every 3000km. The drivers seat is also a bit worn out now too, but generally despite damage caused by me being careless and the odd hummer reversing into it, its still in pretty good condition.

Over the last year I’ve covered 30,731KM, averaging 9.24L/100km with low 8s in the summer and low 9s in the winter time due to the aerodynamic drag of the lights I presume. The highest L/100km was 19L/100 recorded at the Nurburgring in April. I travel an average of 84km/day. The cost per KM works out at 0.13Euro including service and tax, not including insurance. (As this is on another policy for all my cars.)

The car is serviced every 10,000KM with new oil, filters, and plugs using good quality semi synthetic oil. Tires last about 20000km on the rear, and about 12-15000km on the front due to both excessive camber and the number of track days.