I decided to install my innovate LC-1 permanently in the car, whilst this wont give me offline data-logging, it will save some effort when I go for a data-logging run.  In the future, I will be running megasquirt, and will use the LC-1 to provide and AFR readout.

I got my LC-1 from an innovate reseller called Telematica last year, their price was good, and it arrived almost immediately (They are based in greece, and it arrived in 2 days.)  So I ordered a digital gauge, the XD-16, which I will mount in the dash.  The reason being that whilst offline logging is nice with the laptop, it can be a real pain trying to work out what you were doing at any given time, as correlating RPM, Load, and AFR requires some data mangling.  I’m hoping i’ll get a good visual indication of what’s going on with this as I drive.

I used to keep it all in a little plastic box with a serial connector on one end, a 12v adaptor on the other, and long wire going out to the Lambda Sensor, I just removed it all and right now, it looks a bit like this: 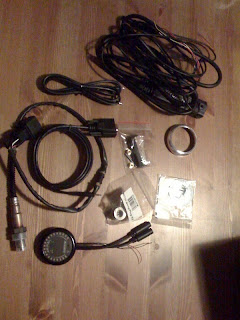 I shall mount the LC-1 onto the bulkhead with the rest of the electronics, and the gauge I shall wire into the dash with a connector for the Serial cable so that things can still be disconnected. The sensor cable has a nice plastic bit which can go into a grommet, if its long enough, I’d like to get it into the scuttle, or engine bay rather than the passengers foot well as its likely to get broken if its there.